Anyone for TEA – SELS?

When we moved into our lovely home twelve years ago there were things we knew we needed to change – the fact that the ONLY bathroom was on the ground floor was the most urgent, for me at least. (Many women over fifty need to go into the bathroom at least once during the night, I find, and making one’s way downstairs when half asleep is not something to be taken lightly!)

Originally, our Edwardian house was built as a family home with four or five bedrooms upstairs and a kitchen, lounge and dining room downstairs with a beautiful, large, square hall in the middle. (I’m still not sure of the original layout upstairs as it had been changed a lot!) When we moved in, the house consisted of the more or less original downstairs plus, upstairs, two double and one single bedrooms and, with its own entrance, a flight of stairs leading to a separate flat containing a lounge, kitchen, loo, shower and a bedroom in the loft. The house had been divided by the previous owners some years earlier, ostensibly for the use of one of their children although we think it probably had been rented out to students or young people at times.

So, we decided to turn the house and flat back into its original form and to put a bathroom upstairs. Julian is excellent at d.i.y. and his first job was to open a way through from the upstairs corridor to the flat. This meant getting rid of a small airing cupboard on the ‘house’ side and the shower on the ‘flat’ side, both of which had been built when the separation took place. Luckily, it wasn’t a long and arduous task although it was quite messy and created loads of dust. Next, Julian dismantled the upstairs kitchen, leaving the separate boiler to heat the upstairs water. (This water-heating arrangement lasted only as long as we could bear it! The boiler was old and barely heated a bathful of water, switching itself off willy-nilly).
Within a year or so of our moving in, we had an upstairs bathroom, which now, after eleven years, needs a little updating but is definitely better than the downstairs one was!

The downstairs bathroom is, of course, still there but minus the bath and with a decent-sized basin – the original was so small you couldn’t wash a sweater in it without getting soapy water on the floor! We are still working out what the next phase regarding the ‘downstairs loo’ should be. The walls are still tiled with shiny glazed tiles all the way to the ceiling and with a large (tile)  dolphin in the middle of the biggest wall. I’d like to remove the tiles but Julian says that all the plaster behind would just fall off and I’m tired of that kind of dust. (I’ll fill you in on other d.i.y. and professional changes which have made me so fed up another time!)

Dolphins on the wall

Now, to the teasels. Three summers ago (2015) we had our back garden completely altered. Two steps below the terrace there had been a lovely big pond with loads of fish, a decorative cherry tree, a small apple tree, loads of ivy, a large acanthus plant, a ceanothus tree, a couple of straggly roses, a hydrangea, a greenhouse with grapes, some  raspberry  canes and a redcurrant and a blackcurrant bush but nowhere to deposit all the rubbish, weeds, grass cuttings etc that are the result of hard work. The garden was on a slope dropping away from the house which meant it was difficult to find a flat enough place for a deck chair. Add to this the only way to get such rubbish from the back to the driveway in front was through the kitchen or dining room and then the hallway  (so, no wheelbarrow loads!)
From the time we moved into our house until three summers ago, various things happened that made us take our eye off the ball as far as the garden was concerned – I had my appendix out, went partially deaf, had carpal tunnel syndrome in both wrists, had both knees replaced, got older, fatter and (if it were possible!) even lazier. Julian got various part-time jobs to keep us in the little luxuries and, for four or five years, had to get up at five in the morning three or four days a week. He’s never been a keen gardener, anyway, and doesn’t notice these things! Anyway, all the fish disappeared from the pond (I spotted a crow dive down, grab one of the larger fish and fly off with it), the pond developed some leaks which would have cost huge amounts of time and money to fix – we had relined a much smaller pond in a different property years earlier and knew what it entailed – the decorative cherry tree was too tall and far too close to the house, the apple tree had been got rid of as it was dead, the ivy was hemming us in, the acanthus was spreading, the ceanothus had gone as Julian had needed to re-roof the shed and it was in the way, the hydrangea had outlived its beauty, the greenhouse was long gone along with the grapes, the raspberries had given of their finest and were on their last legs – it was time for a change! 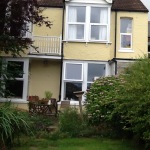 Neither of us is in the first flush of youth, as you know, so we contacted a local company who were delightful to work with. Their designer came up with a plan I loved – a brick seating area, raised beds and a wild-flower ‘meadow’ as well as a ‘water feature’ for the frogs who come back every year to croak, mate and leave their tadpoles behind.

Julian and Rosie surveying the work-in-progress

They started around the middle of August. The first thing we had to work out was how they were going to get everything into and out of the garden. We decided to use the doorway in the dining room (which is used as the studio for painting and displaying our masterpieces) so the men laid a long line of ‘dust-sheets’ from the outer dining room door, through the hall, out the front porch and through the front door. Thus started three weeks of dust, twigs, a little but not much mud, in through one back door and my using the other to carry various hot and cold drinks to a very hard-working group of men who completely transformed what was a mess into a great place for us, our friends and – especially – our dog to use (and abuse!).
The last jobs that were done was putting down turfs (or turves) and sowing the seed for the wild flower ‘meadow’ (a triangular piece of the garden directly in line with the kitchen window where I am now sitting. It is about 24 feet by 12 feet at the widest with the ‘point’ of the triangle nearest the house. Gareth came one morning, raked the triangle to a fine tilth (something I have never managed to do in all my years of gardening!) and sowed two full boxes of seeds onto it. I didn’t ask and he didn’t offer to tell me, what would happen, what kinds of plants would grow. That was at the beginning of September, 2015 and very little happened on that triangle for the next few months – except my having to make sure Rosie didn’t ‘use’ it!

The wild-flower meadow before the flowers came out

In the spring, 2016, there were lots of little green shoots and within a month or so we found poppies, cornflowers and yellow daisy-like flowers. They made a wonderful display! Underneath them I could see all sorts of different types of leaves growing and wondered what they could be but nothing much else happened before the poppies, cornflowers and yellow daisies died down leaving loads of dead, brown stems and leaves. Still, I could see that there were other things growing so didn’t dig it all up but tried to make it look reasonably tidy. [The ‘water feature’ (the dark line which appears in the photo below from the bottom centre and going at an angle into the ‘meadow’) proved a hit with the frogs and contained masses of frog-spawn, later to become tadpoles and eventually tiny frogs which now populate the garden.]

Spring, 2017 arrived. There was definite growth! Things started to appear and I realised I didn’t have a clue what they were. As my birthday is in April I asked for a wild flower recognition book and my lovely daughter and her husband obliged. I spent loads of time out in the garden trying, failing and, finally, succeeding in recognising the vast array of flowers, some of which I had never even heard of. There were: common poppies, red and white campion, salad burnet, ox-eye daisies, vipers bugloss, cornflowers, yellow daisies, sainfoin, bedstraw, feverfew, selfheal, yarrow and – teasels!

The teasels were especially mysterious! When they were still quite short I tried to figure out what they were going to grow into. At first I believed that the big lower leaf was a dock leaf, which, in the UK is used to sooth a stinging nettle stings but quickly realised that it couldn’t be dock! On the backs of the leaves are loads of little thorns which grow along the big vein, there are thorns on the stems from bottom to top and, of course, the teasel is made up of what feel like thousands of thorns. Almost the entire front half of the triangle is taken up with teasels which means there are many, many teasels. I’ve cut down a nice jugful for use as a subject of paintings, I’ve given several armfuls (ouch) to friends but really haven’t a clue what to do with the others. If you can come up with an idea (no rude ones, please – I’ve already thought of those!) let me know.

I am 74, was a teacher, then a dealer in antiques and collectables. When I retired to the seaside I started website selling antique and vintage games and wooden jigsaw puzzles. Now, I'm spending my time blogging, gardening and making oil paintings.
View all posts by Candy →
This entry was posted in Uncategorized and tagged teasels, wild flowers. Bookmark the permalink.