As you who have read my blog about our new dog, Lola, will know, she is supposed to be a chihuahua crossed with a llasa apso. She is sweet and loyal, she rarely barks, she doesn’t pull me over when we walk, she likes other dogs and other people but is not so keen on cats, though she loves to chase those who dare to visit our garden.

I may have mentioned that she had destroyed the dog toy I bought for her rather quickly and she is very good at tearing the covering off doggy tennis balls and removing (somehow) the squeak-making doohickey of said balls. I was determined to find her a toy she couldn’t ruin too quickly and looked on Amazon to see if they had an indestructible dog toy.

There I found just the thing! It’s a finny looking little dinosaur thing made with a fabric which was described as a little less strong than kevlar. So I ordered one. It took over a week to arrive so Lola had to make do with her now non-squeaky balls and the quickly fraying rope toy. The strong toy wasn’t meant to arrive for another week or so and I was really pleased to find it in yesterday’s post!

I squeaked its squeaker so that Lola would look at it then threw it across the room. Lola was so excited! She chased and grabbed the little toy in her little, tiny mouth then ran back and forth. She dropped it in front of me and I threw it again, thrilled that I had found a toy that might last for a day or two. My thrill turned to anxiety when Lola decided to start chewing and found a place on the toy that was (mysteriously) suitable to spend time on. I watched, thinking she’d find it too tough to get through in a couple of minutes but, no, she carried on chewing with her back teeth, and – very methodically went straight through the fabric and the lining and spat out a chunk of filling!

I thought she must have found its one weak spot so I took the poor one-handed toy away from Lola, sewed up the hole and gave the toy back to her later in the afternoon. 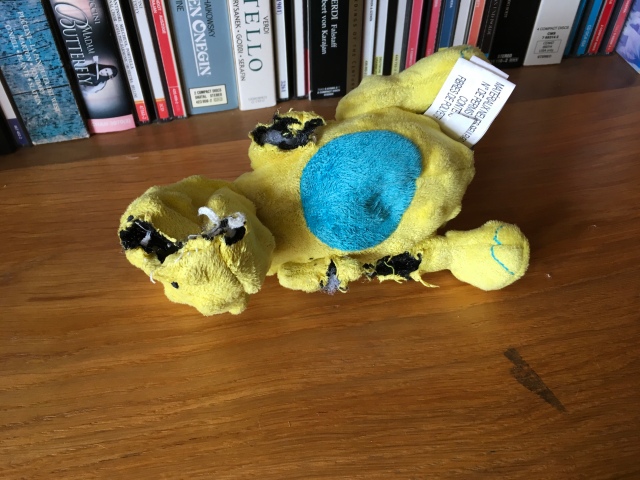 Now Lola is back to playing with her used-to-be-squeaky balls and her even-more frayed rope toy!😳😳😳