After a year and a couple of months, Julian and I decided it was time to visit the Dogs Trust just outside Canterbury. I’ve been finding myself becoming breathless just walking to the corner of our road (through lack of fitness, I think, plus those *few* extra pounds I’ve put on in the last year or so) and Julian has missed the friendly, waggy tail greeting him when he came home. Rosie’s loss was a terrible blow to both of us – I still get weepy thinking about her – and we were not trying to replace her but I need to have a good reason to go out for a walk and it’s always exciting to welcome a new member to the family!

We arranged to go on the Sunday before the May Bank Holiday but Julian went out sketching and was back a little too late so we went on the Bank Holiday. We arrived there at about 12:30. It’s changed in the nearly thirteen years since we found Rosie there – the kennels are partly inside and have viewing windows rather than the much more utilitarian kennels of the past. There are two lots of kennels, each along an entire wall; there are half-walls between the viewer and the glass wall of the kennels making it impossible (rightly) to tap on the glass. On these half walls are sheets of information about the dogs, opposite each individual dog (or pair of dogs).

We walked along the first half-wall but didn’t spot what we were looking for — a small-ish dog which I could handle on a walk, mainly. We walked down the other side and saw a jack russell which is what Julian was hoping for, having met a jack russell with one of his painting friends. That artist brings his dog with him to most of the painting outings and the dog is friendly with other dogs and people, lies next to his master while he is painting and is unbelievably well-behaved! But, the jack russell we saw wasn’t ready for re-homing yet so we were a bit down-hearted. Julian was all for leaving straight away but I insisted that we should fill out a form first, saying who we are and what kind of dog we were looking for.

As I was filling in the form, a little dog came through the entrance with a man on the other end of the lead. The two went up to the counter and Julian whispered to me, “That dog has a small head!” I turned and looked — and agreed — then finished filling in the form and took it up the the counter. The woman there said we should sit and wait and someone would come and go through our form with us so we went back to the table and waited. A few minutes passed before another person came and went over our form with us. After hearing what it was we were looking for and why, she told us about the jack russell who wasn’t ready for re-homing, another who was in a ‘foster home’ and then she said, ” We do have a small dog which should have been going home today with a man but he has decided not to take her. She hasn’t spent any time here in the kennels because she has come from a family home and we know all about her, so she’s been living with a ‘foster’ mum. Her name is Eda and she is in the office right now. Would you like to meet her?”

We said that we might as well, as we were there and she was too, so the woman went off and came out of the office with that same dog with the ‘little head’. Eda was slightly wary but quite friendly, too. We took her for a woodland walk (the Canterbury Dogs Trust owns a lovely woodland right there) then came back and said we were interested.

Arrangements had to be made. Someone had to come and see if we and our garden are suitable; a dog must be visited at the kennels three times before an adoption can take place; the adoptive dog-parents must attend a “Pre-adoption Talk”. We arranged to visit Eda again on the following Friday and again on the Saturday, which was also when the talk would take place. And we would be able to take her home with us after the talk!

You already know, I think, that I find it difficult to get up in the morning due to the amitriptyline I take for the dreaded sciatica. The Dogs Trust is about 45 minutes from home and the pre-adoption talk was at 9:30am. That meant I had to get up no later than 8am if we were to leave at quarter to nine! Of course, the night before I was quite excited about seeing Eda and bringing her home so I didn’t sleep well at all but I did manage to get up early (for me) at half past seven. As we drove out of Broadstairs I was glad that the traffic wasn’t too bad but I was still anxious. What if we were late and missed the talk!

Luckily, we made it with a few minutes to spare. Another family were a bit late but all that happened was we all waited until everyone was there. The talk was just common sense things like what to feed your dog (a free 2 kilo packet of dried food was included in our ‘doggie bag’); about the use of a harness rather than a collar and lead; about phoning with any behavioural problems — and then we were each given our bright yellow Dogs Trust bag and sent into the main reception area to pay our fee, buy a harness for Eda and collect our new little housemate.

We took Eda for one last walk (before she was given the new name of Lola), then strapped her in the car via her harness’s special attachment and set off to Broadstairs. We had been told she hadn’t often been in a car so I sat in the back seat with her — remembering how very upset Rosie always was when we took her anywhere in the car.

Lola sat very nicely the whole way home! She didn’t once jump on my lap as Rosie had done. If Lola had jumped on to my lap I would have let her as she is such a lightweight. Rosie, on the other hand was quite a heavy dog and it hurt when she did it. Rosie’s ultimate goal was to get into the front seat and sit on Julian and my job was to hold on to her and stop that happening. In the end we got a nice cage for Rosie to travel in but we won’t need that with Lola.

SOME FACTS ABOUT LOLA:

She is around two years old and was bought, as a puppy, by the family who had her for most of her two years – a family of mum, dad and two very young children. We were told that due to ‘work circumstances’, they could no longer keep her so they gave her to the Dogs Trust who put her into a ‘foster’ home. She is, they said, a chihuahua x lhasa apso . She is small but not tiny, she is fast, she loves playing with her toys (and destroying them quickly), she eats well and sleeps all night without waking me up to go outside. She loves her walks which, so far have been around the nearby roads but, when it’s possible we’ll take her to the beach and to various parks. She runs round and round the garden, chasing a ball or, having caught it, carrying the ball. She always has a look in several places for the ginger cat who thought this was his garden until Lola came. She is full of energy but also likes to nap (getting ready for the next big energy spurt). 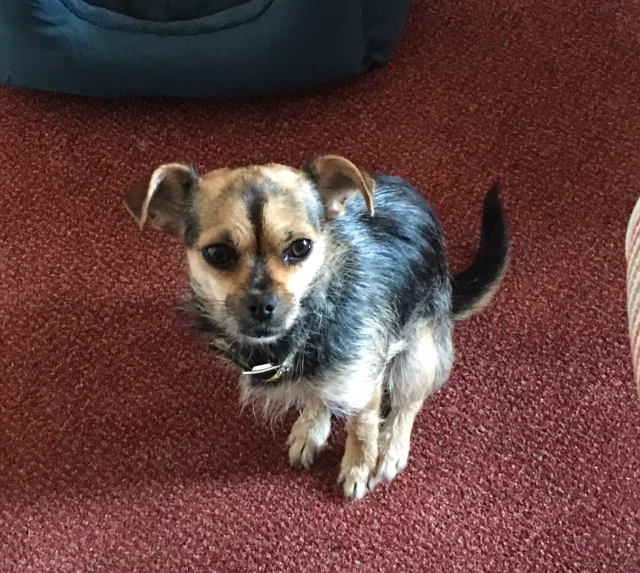 Today I went out shopping, leaving her with Julian. When I got home she desperately tried to leap from the floor into my arms and didn’t stop until I picked her up and gave her a cuddle. She’s not Rosie but she is worming her way into my heart!

Must finish, now……time for walkies!