Back in the seventies, Pam Ayres wrote a ditty about her teeth and how she wished that she had looked after them properly. That little ‘poem’ struck a chord with many, many people, I imagine, and I was definitely one of them!

I was born in 1943. Dentistry, while not in its infancy, was – compared to today – still in its toddler-hood. As I have intimated before, my mother was not exactly ready for motherhood and, before I had many teeth (maybe six?), I had a baby sister. Childcare was not my mother’s strong point and, though I’m sure each of us had a toothbrush, I’m not entirely sure she helped us to use it, nor did she nag us to use it, even when we were older. (Though she did have the terrible habit of asking us loudly, even when we were adults, “Have you brushed your teeth today,” just as you were going into a shop or – this is true – getting into a cab to go to one’s own wedding!)

So, my sisters and I didn’t grow up with the most hygienic ideas and rules and achieved our twenties with a lot of fillings between us. Our first dentist was one of our grown-up cousins (at least that’s what we were told although I can’t see any family connections when looking at a family-tree). He was older than our mother, most likely in the generation above hers, and he had his dentist office (dental surgery for my British readers) in downtown Zanesville, not far from my great-grandmother’s wonderful house.

My first visits to the dentist must have been traumatic because I can still remember the noise and feel of that gigantic drill he used and the taste and smell of the bits of tooth left in my mouth afterwards.

I don’t remember visiting a dentist again until we had moved to London. That’s not because we didn’t have treatments (we must have, judging by the number of fillings in my mouth) but they obviously were not memorable and I have put them and the anxiety they must have caused, out of my mind. In fact I barely remember visiting a dentist until the mid to late sixties. Then it got bad! We lived in Chiswick from around 1965 and I can remember, vividly, having a terrible toothache. I found a dentist just a short walk away, in the High Road, and walked into his ‘torture chamber’, certain that there would be five or six holes needing filling. That dentist checked my entire mouth then told me that he would not be able to do that amount of work on the National Health! He said, “There are three, maybe four, to be removed and eleven teeth needing filling and the National Health will not pay me for doing such a lot of work. I can, however, do the work privately.” 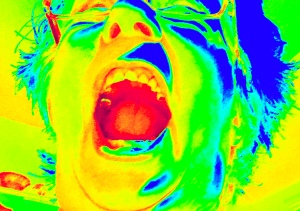 I made an excuse and left without treatment (we were not at all well off at the time and couldn’t afford to have private dentistry). I managed my toothache with oil of cloves until I had, obviously, convinced that tooth it didn’t hurt any longer! In fact, I didn’t go to a dentist for several years until that same cavity redoubled its efforts and the oil of cloves had no effect. I went to a dental practice in Goldhawk Road (a bus ride from my house in Chiswick) and found,there, an ethical dentist who pulled that one tooth and filled six more, all on the National Health. He was horrified to hear my story of the unethical dentist in Chiswick, who had actually closed his practice during those two years. This was the first dentist (an Australian, as it happens) who worked so painlessly that I determined to go to the dentist regularly. My determination lasted for a year or so and then petered out as life got hectic.

During the following years, British dentists realised that their patients were often scared, anxious or even terrified and started working on their ‘bedside manner’. Dental schools and dental tools were upgraded, thankfully! The injections, which helped dull or remove the pain during dental work, were given via much slimmer needles; the drills became much faster and cooler and there was the ‘sucker’ that took away excess saliva and old bits of tooth and filling. None of this made a difference to my sister, Judy, though.

She had to have a couple of teeth out and arranged with a surgery in Ravenscourt Park to have the work done under a general anaesthetic as she hated the novocaine injections. To have this done, she needed me to take and collect her, so ‘Veronica’ and I accompanied her in my old Cambridge A55 and waited outside while she went in for the work. We waited and waited…..and waited but she didn’t come out. An hour and a half went by and, finally, I went up the stairs to the receptionist to ask about Judy. The receptionist said that Judy was resting as she had fainted just as they were going to give her the anaesthetic and that she couldn’t have the work done that day! Eventually, Judy joined us and we all went home. I imagine she had the work done another day but don’t remember any further upsets.

Speaking of ‘Veronica’, when she was about eighteen months old she fell against a coffee table and knocked one of her front baby teeth out. We waited some years and, finally, the adult tooth appeared. One day she had an upset stomach and was being sick. She leaned over the toilet and, at the same moment, I lifted the seat so she wouldn’t be sick on it, and knocked her tooth out! She has hardly forgiven me for that, and I can’t really blame her!

Now that I am an old woman I look after my teeth really well! I brush, I floss, I visit the dentist twice a year and still have a surprising number of my own teeth still in use. Not many years ago I debated getting a ‘plate’ so that I have less chance of getting to a point where I can’t chew with my back teeth. On one side the top back tooth has nothing to grind against which means I have to chew on the other side. The top back tooth on the chewing side was damaged badly (and painfully) when I bit down on one of those little silver balls that was decorating a Christmas cookie which I had bought at Ashford station on my way home after visiting Patty in her old folks’ home. I was sure nothing could be done to save it but I was wrong! Where the remains would just have been yanked out forty years ago, the dentist I was seeing at the time worked exceedingly hard to make me a crown to replace it.

It wasn’t long before Christmas and he made a temporary crown to take me over the holiday, leaving the dreaded root canal work until the holiday was finished. When I went back to have the temporary crown removed and the rest of the work done, he found that it was on so strongly that it couldn’t be removed (and he really tried for quite a while to remove it!) So, he left the temporary on and drilled through it to do the root canal work and I still have the same one!

I had to change dentists a couple of years ago and went to the one Julian uses. He is, I believe (from his accent) a South African and he knows how to treat nervous patients – (Julian was a much more nervous patient than I!) The new dentist is very impressed by my ‘temporary’ crown but has given me an even more impressive filling! For years the back tooth (below the temp crown) was a gorgeous gold (crown) and when it needed to be removed was replaced by a more mundane ‘white’ but it needed to be replaced about two years ago. There was very little tooth for it to be attached to but, miracle-worker that he is, he made a filling that did the job. Then, three weeks ago, I was eating my Sunday dinner when part of the filling fell out. Eating and drinking didn’t cause any pain so I wasn’t too worried but the edge of the tooth was sharp and kept annoying the side of my tongue so I went to see my ‘new’ dentist. He was pleased to see that it was only a little bit of the original filling and it was easy to replace it. I was more than pleased! No drilling, no injection, no pain and, when he had finished, no catching on my tongue, either.

I recently saw in a news report that scientists are working on cell stimulating medications that can trick teeth into repairing themselves or even growing again!!! I do hope, for the younger generations’ sake, that this can be done in a safe and cheap way. It’s really too late for my teeth, far too late for those people who have mouths full of dentures, I imagine, but not too late for my beautiful grand daughter who, as it happens has no fillings yet and is nearly 23 years old! She has no memories of huge (pneumatic) drills taking up every bit of space in her mouth and drilling down as far as her chin; no memories of gigantic hypodermic needles approaching her mouth and tearing into her gums (or even worse, the roof of her mouth!); only memories of a nice white office where some fairly disgusting but rapidly disappearing paste was spread over her teeth leading to no fillings.

I realise I’ve been fairly lucky with my teeth, that other people have had much worse problems, and I am thankful for that. But, generally, for most of the population, there is no other part of the body that has to be worked on, sometimes with pain and certainly with anxiety and I hope that in the near future, these scientific miracles happen and teeth cause no more problems than a scraped kneeor broken finger-nail. 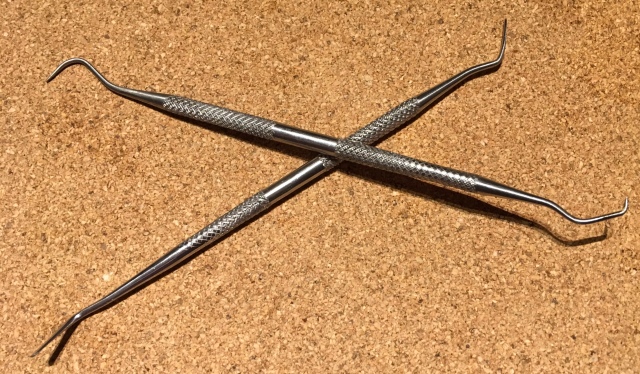 (While these aren’t real dental tools, they certainly look like they are. I used them when making jigsaw puzzle pieces from a resin.)

I am 74, was a teacher, then a dealer in antiques and collectables. When I retired to the seaside I started website selling antique and vintage games and wooden jigsaw puzzles. Now, I'm spending my time blogging, gardening and making oil paintings.
View all posts by Candy →
This entry was posted in Uncategorized and tagged Cambridge A55, cell stimulating medications, Chiswick, dental instruments, dentists, fillings, Goldhawk Road, Natiional Health, oil of cloves, Pam Ayres, Ravenscourt Park, temporary crown. Bookmark the permalink.