Why we spent a full day in the cupboard and other mysterious tales.

Back in 1956 or ’57, after we had returned to Cincinnati from Reno and parts west, we settled back into our old homestead in McAlpin Ave. We lived in what the British call a ‘bungalow’ and the Americans call a ‘ranch-style house’. There was a big L- shaped lounge-diner with huge plate-glass windows at one end with a modern kitchen off that, three good-sized bedrooms, a family bathroom and a second bathroom off the master bedroom. The master bedroom also had a walk-in wardrobe with a door at the end from which one could go into the cellar or outside. There were also doors to the outside world in the dining part of the L-shaped room and in the kitchen.

Several times it appeared to us (Mommy, Judy, Jennie and I) that someone had been into the house although we couldn’t find an unlocked door or window and nothing was gone but, then, one day when we were getting ready to cook supper we found that all the cutlery and utensils had disappeared from their allotted drawer! It was found, eventually, in the cupboard just underneath which housed various pots and pans or maybe potatoes and onions.

Now we knew that someone had sneaked in and was playing games with us so we decided to catch them at it. The following Sunday we all went out, got into the car and drove about a hundred feet down the road to the home of the Connellys and we parked in their garage. (They knew we were going to.) Once there we sneaked (!) up their outside stairs then made our way through the surrounding woods to our house, doing our best not to make too much noise and hoping we weren’t seen by the ‘burglar’. We entered the house by one of the doors at the back then made our way to the walk-in cupboard where we made ourselves as comfy as we could in the circumstances.

This cupboard was quite large – perhaps eight feet by fifteen feet and had a pole that went the length of the cupboard on the left-hand wall, leaving the right-hand side free but there was no furniture so we sat on the floor, chatting, perhaps reading…I can’t remember, so it wasn’t anything unusual.

After some hours we realised that it was getting near to meal-time (we had a biggish dinner on Sundays at around three) so, mom and I sneaked out to the kitchen and started preparing dinner. [Strangely I can’t remember anything that we ate at home when I was a child/teen except for ‘chipped’ beef in a milky sauce (ugh), succotash, beets, sweet corn, mashed potato, rice, okra (yuck!), spaghetti (bolognaise – though it wasn’t called that in those days), ‘johnny marzetti’ which was spaghetti bolognaise with noodles rather than spaghetti, and corned beef hash]. (There were obviously other foods but I have no memory of them.) I have a feeling that we cooked something that needed carving but I haven’t got a clue what it was and also probably some sort of potato and vegetable.

When it was ready to eat, we reached a dilemma – should we eat in the cupboard or at the table? We ate in the cupboard. I vaguely remember carrying the food into the cupboard and putting the plates and bowls on the floor, then carving whatever it was while sitting on the floor with it. It was very uncomfortable! I don’t remember the ‘eating’ part at all or the tidying afterwards but that all must have happened.

The day progressed, it turned dusky and then dark. No one had tried to enter the house!☹️

We had spent a full day cooped up for nothing – except for the memory of a day in the walk-in wardrobe.

Many years have passed since that incident. I have come to the conclusion that it was probably Judy who was the culprit; she really liked to make mysterious things happen. 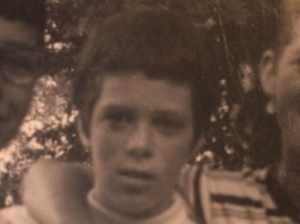 <<<<<<<<<
nother time she and I went with our best friend, Rosemary, down town in Zanesville to Rosemary's music lesson. We waited outside while Rosemary had her lesson and, at one point, I went inside, possibly to find out how near Rosemary was to finishing or maybe to go to the loo. When I went back out on to the porch Judy was very excited. She had been watching, she said, as two men came out of the house across the road carrying a fridge which they put into their car before driving away with it. She had memorised their license number, she said; it was V3509 and obviously the two men were burglars who had stolen this fridge!

When Rosemary came out we told her about this terrible theft and together we vowed to catch the thieves! We spent the next couple of months looking at every license number that we could find – but we never did find V3509.

2 Responses to Why we spent a full day in the cupboard and other mysterious tales.