“Where did SHE come from?” says reader. Interesting question! (Or not) Part one

(I’m going to try not to mention any names that can be easily identified – some members of my family might not want you to know they’re related to me!)

My mother and father were both ‘beautiful young things’ back in the late thirties. She – from a well-off family – who had spent much of her young life in the sleepy Ohio town of Zanesville with a governess and the rest in Los Angeles and at boarding school near Pebble Beach; he who was the very good-looking son of a quite famous writer.

The story is that the two spotted each other at some sort of evening function and each knew that the other was the one. They married in October, 1941 and went back to Zanesville where they produced me in April, 1943 and my sister, Judy, in November, 1944. 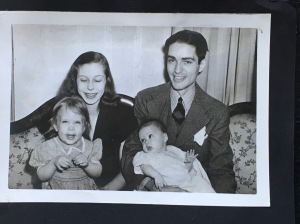 Life for the two of them must have been difficult. My mother had to learn housekeeping from scratch and, as with most new mothers, babycare,  and to have a toddler of eighteen months and a new baby would have been a terrible strain. I’m not certain when things fell apart but they divorced some time before the middle of 1947 – possibly as early as 1946. Mom married Bill who was a returning ‘seabee’ in 1947 and Dad went back to California and married a young woman from Michigan. My sister Jennifer was born to my mother and her new husband in April, 1948 on my fifth birthday (see my earlier post) and my brother, Lindsay, was born in Ocober 1947 to my father and his new wife. (Dad went on to have another three, giving me six siblings/half siblings altogether.)

My childhood was rather bohemian in many respects. We moved to Cincinnati so that my mother and Bill could study at the university there. We went to the local elementary (primary) school and enjoyed living in a ranch-style house surrounded on three sides by trees and quite high above the road which went past – so high up, in fact, that we had to go up and down around fifty stone steps let into the earth. The mailbox was half-way down the steps. It was one of those typical American mailboxes with a flap that pulls down to open it and a flag to show if there’s something inside. 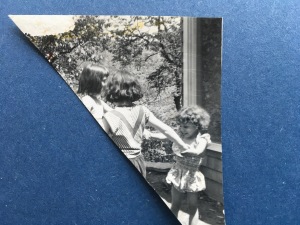 (Candy, Judy and Jennie on the patio in Cincinnati c.1952)

In 1956 my mother decided to divorce Bill. We went to Reno on a great train ride, lived on a guest ranch where we met some weird and wonderful people, went to California for a few months then back to Zanesville and from there, eventually, ended up back at our house in Cincinnati. My mother finished her studies at university and officially became an architect at a time when women still didn’t have careers outside teaching, nursing and entertainment. She found there wasn’t going to be a job for her locally and decided that we should “see the world” and joined the US Navy as a civilian architect. Her first, and only, posting was London where we arrived in August, 1958.

I was fifteen years old when we left Ohio and had just finished my freshman year of high school. I hadn’t really started dating, yet, nor was I the cheerleader-type. My school was a mixed high school (and rather like a grammar school for those of you who are English and reading this) which started all pupils on latin in year seven but as I didn’t start there till year nine I didn’t have to go to latin classes – though I wish I had! We went to school and back by school bus. My memory of those journeys is completely non-existent! The only thing I do remember is sitting on the bus waiting for it to leave school and a boy came along and knocked on the window next to me to get my attention. There must have been a fault in the glass because the whole  window broke into tiny pieces and fell on my face and head. I seem to remember a tiny cut on one cheek but I survived unhurt, otherwise. 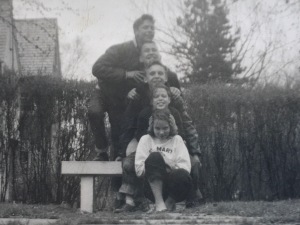 (Our best friends in Zanesville. I’m at the bottom, then Judy, Barry, Billy and Dave)

In August, 1958, we packed up everything we would need for a home in London and took all the rest and stored it in my grandmother’s cellar – books, toys and clothes. Anything we might need on arrival went into suitcases to go with us and furniture, other clothes, the Encyclopaedia Britannica Jr, and our brand new and completely beautiful refrigerator went into a big crate to be delivered to England by sea. The Navy gave us a booklet describing what England would be like in autumn – probably cold and damp – so, we made sure that we took all our warmest clothes.

We left Zanesville by train to New York on the 28th of August, stayed one night in New York and flew from New Jersey on the 29th arriving on the 30th. We landed somewhere in the north of England, possibly Liverpool. The flight was so scary that I  vowed never to go on another plane! The plane itself was propellor driven and had been used earlier in its existence as a troop transport plane. There were cabin staff whose job seemed to be to hand out a shoebox full of sandwich, drink, and chewing gum to each passenger (mostly family of USAF officers). We landed that night for refuelling at Gander Airport in Newfoundland and took off again about an hour later. It was after midnight when we were all settling down. Suddenly the lights were turned up and the stewardess began to describe how to put on our life jackets, where the shark repellant would be found, when to blow a whistle – and, I swear, she said this was for ‘when we go down’!  (A regular passenger on this flight told us later that she had never experienced this before.) That was enough to put me off flying for life!

We went to London by train and were met at, I think, Paddington Station by a man named either Garfinkle or Garfunkle who had been given that task by someone in the Navy. He took us to a boarding house in Sussex Gardens, Paddington. The landlady was a Mrs Angus who had been married (perhaps) to a Norwegian sailor though why her name was Angus, I’m not sure.

It was really only shortly after the war, there were still huge bomb sites in London, soft toilet paper had not yet reached the shops, and there was almost no refrigeration in private homes – or in boarding houses! The milk for breakfast during the six weeks we lived there was always slightly curdled – only slightly, but still curdled. The weather, instead if being cold and wet, was warm and muggy and we were wearing woollens and heavy tights (unknown as yet in England). We lived in one large room on the second floor (first floor, if you’re English) at the front facing the street. The bathroom and toilet were separate and not en suite – we shared with totally unseen fellow roomers. The loo was in a little tiny room with a window above the toilet. This window looked out into what was, essentially, a light-well and there were two or three other similar little windows also looking out, their walls all joined together several storeys above the ground. My sister, Judy, complete daredevil that she was, climbed up on the toilet seat one day, slithered out the tiny window, clutched window sills and found something for foot holds and did a complete tour of the well. Luckily, our mother never found out – if she had, she probably would have had a heart attack then would have sent Judy back to America to live with Daddy! 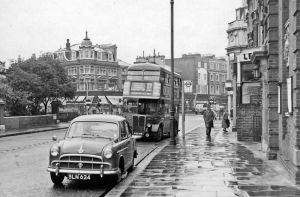 I am 74, was a teacher, then a dealer in antiques and collectables. When I retired to the seaside I started website selling antique and vintage games and wooden jigsaw puzzles. Now, I'm spending my time blogging, gardening and making oil paintings.
View all posts by Candy →
This entry was posted in Uncategorized and tagged California, London, Ohio, US Navy, Zanesville. Bookmark the permalink.

1 Response to “Where did SHE come from?” says reader. Interesting question! (Or not) Part one